Last weekend was one of the unique moments in Fedora’s history that we were more than 30 Fedora contributors at a single event, FOSDEM 2009.

I met Joerg, Aanjhan and Robert at Brussels Central Station and we had a quick dinner before heading to the beer event, the famous Delirium. It felt so good to meet the rest of the fedora crew, Gerold, Jeroen, Stephan, the Greeks, the italians, the French, the Belgians, the Dutch, the Swiss, the Germans, the Americans, and the rest of the fedora contributors from the small planet called Earth. Afterwards some of us headed to another bar to chit-chat. Jeroen convinced me to co maintained a p0rn package and I was too tired to ask why.

I woke up at 07h00 to prepare my presentation about FEL which was for 14h00. At 09h00 I headed to Brussels along with beers for Papadeas Pierros. I promised Papadeas those beers because he printed and brought FEL flyers. 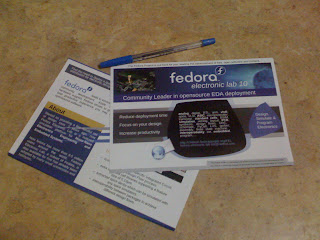 Before the first presentation could start, I was able to pay a visit to most booths to see what is new in terms of opensource software and meet some people I know of from other projects. Some of my remarks are the following:

FOSDEM IS SMALL FOR FEDORA !!! There had been many Fedora presentations with the devroom filled up and leaving people sitting on the floor. FOSDEM Organizers should acknowledge that Fedora is a community builder and that FOSDEM has been one of the Fedora EMEA contributors meeting place. During the last 4 years, the number of Fedora contributors attending officially FOSDEM is doubled each year. Soon the Moore’s Law could even be applied. Next year, we should ask for a big devroom and receive it.

Christoph did a RPM Packaging crash course in one hour. I stepped in at 14h00 to talk about Fedora Electronic Lab.

My Presentation can be downloaded from here.

I have also covered some sensible topics (with respect to what the opensource software community does not want to hear. E.g.:

Since one hour is not enough, I had to briefly cover everything and talked about how community like gEDA/gaf are striving hard to bring an amazing set of tools to the opensource community. I covered a bit about my own field chip design at low-level hardware design and how to use different tools at different stage of the design flow. Oh yes, TCL and perl are meant for hardware designers, else it is software development. I took 5/10 mins of MrTom’s hour slot, sorry 🙂 to answer a few questions.

I got of the room with a Debian guy who was very excited with FEL’s commitment and wished that we could provide more embedded solutions. It was nice talking to him and we shared some common goals. Then, I headed to Max’s presentation who was explaining the 4 F in the Fedora Community. One of the F reflects “Friends” and anyone can clear acknowledge that Fedora contributors are a bunch of Friends all striving towards the same goals and get the job done together with an exciting and lively community.

To my surprise JonathanRiddell attended my presentation and actually I had a slide on Umbrello about how to make Project-specific perl scripts and design methodology with UML. Umbrello is currently maintained by Jonathan. I believe he was happy that someone did talk about his software.

I also met KrisBruytaert who invited to planet grep be. The rest of the saturday was spent wishing MrTom’s Happy Birthday, attending Greg’s presentation, talked to many people at the Fedora Booth. Some people were either already using FEL or helping others use FEL. There was one man who is shipping each month a DVD with FEL updates to his brother in India. A lot of people were asking for more embedded solutions. At night, I recommended a few people kwak and its glass. It was well appreciated by Fedorans.

I was at the booth in the morning and afterwards got drifted away from the booth as I meant a few people I know from different linux events. Constantly, I was reminding Max and Greg that they have been booked for a little chit-chat about FEL. With Max and Greg, we discussed about FEL Livedvds and the bridge that FEL is creating between two open communities. Greg was more interested what kind of business model FEL could provide. Greg, Sebastian, some OLPC contributors and I got dumped into a place to eat something. It was only at the end, when Greg realised where he was. To my surprise, Spot was also at FOSDEM and we headed to the FOSDEM bar for a drink and talking about licenses. I was planning to release my SystemC SRPM without the source on my fedorapeople account. Spot recommended MIT.

I also met a CentOS contributor who was eager to repackage gEDA for CentOS. I didn’t understand the reason behind this, because I am also maintaining gEDA packages for the EPEL EL-5 branch. In accordance to him and another CentOS developer, EPEL is not 100% compatible with CentOS. I was hoping to catch DagWieers to confirm it. I also heard rumours (based on my complete ignorance on the topic) that CentOS is no longer just rebuilding RHEL packages.

Aanjhaan and I spent some time alone exchanging some views about the event, users requests, feedbacks and how we can shape all this in time for F-11. It was nice to meet him in real life and you can see he like learning new things 🙂
Finally, Fabian informed me that he kicked me out of the 20 top fedora packagers list. It felt so good to meet everyone and talked about some fedora related discussions and personal things as the friendship strengthens.

This site uses Akismet to reduce spam. Learn how your comment data is processed.